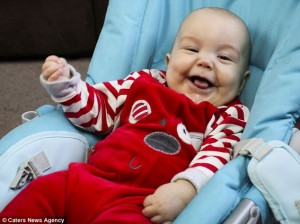 Baby Edward Ives’ heart was racing at more than 300 beats per minute, so doctors sedated him, wrapping him in a blanket filled with cooling gel – and lowered his body temperature to about 91 degrees, the newspaper reported.

Doctors told Edward’s parents he had a five percent survival rate – he was born with supraventricular tachycardia and had to be delivered at 35 weeks at the University College London Hospital.

On the fourth day, Edward’s heart rate returned to normal, and doctors slowly warmed him back up to 98.6 degrees.

When Edward was born in August last year, he was diagnosed with a condition called Supraventricular Tachycardia. It caused his heart to race at over 300 beats per minute – compared to the usual 160 bpm. This reduced blood flow to his vital organs and left Edward on the brink of death.

Then medics suggested they wrap Edward in a blanket filled with a cold gel and allow his temperature to drop from 37C to 33.3C.

The doctors at University College London Hospital cooled Edward for two days straight, allowing him to be brought up to a normal temperature when his heart beat slowed.

But when his heart began to race once more, doctors again had to cool the little boy down for two further days. Mrs. Ives first became suspicious that something was wrong when she was 35 weeks pregnant.

Doctors decided to cool Edward in order to slow his heart rate down and ensure his organs would not be deprived of oxygen.

In total Edward spent four days wrapped in a blanket that lowered his body temperature, whilst also being shocked five times with a defibrillator, which is an electric current directed into his heart.

It was on the evening of the fourth day of cooling that Edward’s heart rate finally returned to normal.

Medics then began to warm Edward’s body by half a degree every 12 hours, and the youngster slowly began to improve.

A month later, after being referred back to The Lister Hospital, Edward was finally allowed to return home to his family.

Six-month-old Edward is now a healthy and happy baby, back at home with his family.

SVT is caused by abnormal electrical impulses that start suddenly in the upper chambers of the heart. They may be triggered by exertion or stress.

Although it is possible Edward may have further heart-racing episodes, they will most likely be harmless and not last long.

“All I wanted to do was scoop him up and give him a warm cuddle. I just had to keep reminding myself that it was saving his life,” Edward’s mother, Claire, 29, told the Metro. Claire said her son is home now, and doing well.