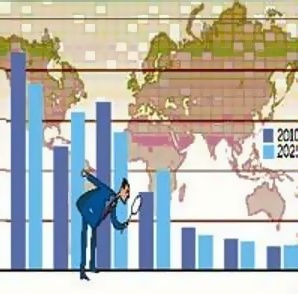 WASHINGTON: In a matter of six years, India emerged as the world’s third-largest economy in 2011 from being the 10th largest in 2005, moving ahead of Japan, while the US remained the largest economy closely followed by China, latest figures have revealed.

“The economies of Japan and the UK became smaller compared to the US, while Germany increased slightly, France and Italy remained the same,” according to data released on Wednesday by the International Comparison Program (ICP), hosted by the Development Data Group at the World Bank Group.

“The relative rankings of the three Asian economies — China, India, and Indonesia — to the US doubled, while Brazil, Mexico and Russia increased by one-third or more,” the report said. The world produced goods and services worth over $90 trillion in 2011 and that almost half of the total output came from low and middle-income countries, it said.

According to the major findings of the ICP, six of the world’s 12 largest economies were in the middle-income category (based on the World Bank’s definition).

When combined, the 12 largest economies accounted for two-thirds of the world economy and 59 per cent of the population, it said.

Asia and the Pacific, including China and India, account for 30 per cent of world GDP, Eurostat-OECD 54 per cent, Latin America 5.5 per cent (excluding Mexico, which participates in the OECD and Argentina, which did not participate in the ICP 2011), Africa and Western Asia about 4.5 per cent each.

“China and India make up two-thirds of the Asia and the Pacific economy, excluding Japan and South Korea, which are part of the OECD comparison. Russia accounts for more than 70 per cent of the CIS, and Brazil for 56 per cent of Latin America. South Africa, Egypt, and Nigeria account for about half of the African economy,” said the report.

“At 27 per cent, China now has the largest share of the world’s expenditure for investment (gross fixed capital formation) followed by the US at 13 per cent.

India, Japan and Indonesia follow with 7 per cent, 4 per cent, and 3 per cent, respectively,” the report said.

China and India account for about 80 per cent of investment expenditure in the Asia and the Pacific region.

Russia accounts for 77 per cent of CIS, Brazil for 61 per cent of Latin America and Saudi Arabia 40 per cent of Western Asia, it said.

The report said low-income economies, as a share of world GDP, were more than two times larger based on PPPs than respective exchange rate shares in 2011.

Roughly 28 per cent of the world’s population lives in economies with GDP per capita expenditure above the $13,460 world average and 72 per cent are below that average.

The five economies with the highest GDP per capita are Qatar, Macao, Luxembourg, Kuwait and Brunei.

The first two economies have more than $1,00,000 per capita, the ICP report said.

Eleven economies have more than $50,000 per capita, while they collectively account for less than 0.6 per cent of the world’s population. The US has the 12th-highest GDP per capita.

The five economies with highest actual individual consumption per capita are Bermuda, US, Cayman Islands, Hong Kong and Luxembourg.

The world average actual individual consumption per capita is approximately $8,647, it said.