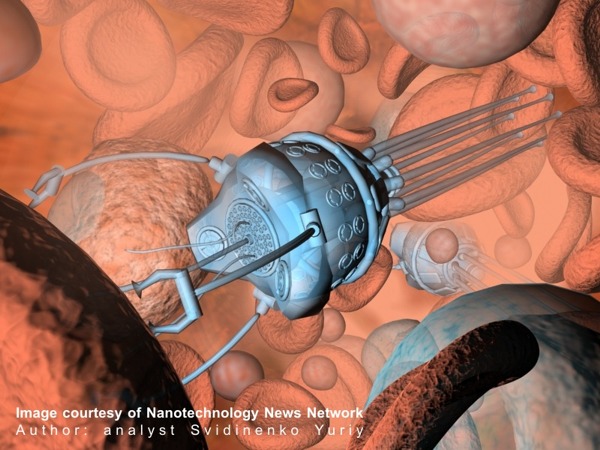 Nanorobots are nanodevices that will be used for the purpose of maintaining and human body against pathogens. They will have a diameter of about 0.5 to 3 microns. The powering of the nanorobots can be done by metabolizing local glucose and oxygen for energy. Communication with the device can be achieved by broadcast-type acoustic signaling.

A navigational network may be installed in the body, with station keeping navigational elements providing high positional accuracy to all passing nanorobots that interrogate them, wanting to know their location.

This will enable the physician to keep track of the various devices in the body.

Nanorobots would function similarly to the white blood cells in our bodies, but they are designed to be much faster at destroying bacteria. This type of nanorobots should be able to eliminate bacterial infections in a patient within minutes, as opposed to the weeks required for antibiotics to take effect.

Nanorobots has multiple functions of imaging, manipulation, characterizing mechanical properties, and tracking. In addition, the technique of tip functionalization allows the nano robot the ability for precisely delivering a drug locally. Therefore, the nano robot can be used for conducting complicated nano surgery on living samples, such as cells and bacteria.

To cure skin diseases, a cream containing nanorobots may be used. It could remove the right amount of dead skin, remove excess oils, add missing oils, apply the right amounts of natural moisturizing compounds, and even achieve the elusive goal of ‘deep pore cleaning’ by actually reaching down into pores and cleaning them out. The cream could be a smart material with smooth-on, peel-off convenience.

A mouthwash full of smart nanomachines could identify and destroy pathogenic bacteria while allowing the harmless flora of the mouth to flourish in a healthy ecosystem. Further, the devices would identify particles of food, plaque, or tartar, and lift them from teeth to be rinsed away. Being suspended in liquid and able to swim about, devices would be able to reach surfaces beyond reach of toothbrush bristles or the fibres of floss. As short-lifetime medical nanodevices, they could be built to last only a few minutes in the body before falling apart into materials of the sort found in foods (such as fibre).

Medical nanodevices could augment the immune system by finding and disabling unwanted bacteria and viruses. When an invader is identified, it can be punctured, letting its contents spill out and ending its effectiveness. If the contents were known to be hazardous by themselves, then the immune machine could hold on to it long enough to dismantle it more completely.

Devices working in the bloodstream could nibble away at arteriosclerotic deposits, widening the affected blood vessels. Cell herding devices could restore artery walls and artery linings to health, by ensuring that the right cells and supporting structures are in the right places. This would prevent most heart attacks.

Nanorobots would be able to repair damaged DNA and allow our cells to function correctly. These little guys could be built to perform surgical procedures more precisely. By working at the cellular level, such nanorobots could prevent much of the damage caused by the comparatively clumsy scalpel.