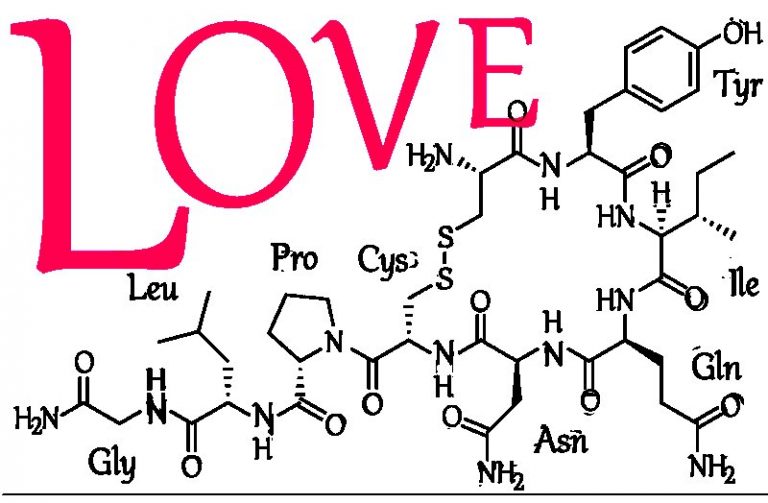 When I was planning to write this blog the first thing which came to my mind was Love since Valentine’s day was around, so I thought of writing something on Chemistry of Love.

Most of you must have heard people using the phrase “they have good chemistry”. The saying may have originated from the chemical combination which we see in Chemistry occurring only between chemicals with some sort of affinity. But, Many of us are not aware that there is serious chemistry involved in act of Love on a scientific level. The chemical found responsible is Oxytocin, a hormone some time referred to as Love Hormone, is a neurotransmitter associated with breast-feeding and birth is also found to be associated with trustfulness, empathy, intimacy, sexual behavior, etc. It has been found that oxytocin level increases during the acts of romancing, hugging, kissing, lovemaking, etc.

Oxytocin is a chemical in your body. That’s all. But that doesn’t make it simple.

Oxytocin is a peptide of nine amino acids (a nonapeptide) in the sequence cysteine-tyrosine-isoleucine-glutamine-asparagine-cysteine-proline-leucine-glycine-amide (Cys – Tyr – Ile – Gln – Asn – Cys – Pro – Leu – Gly– NH2, or CYIQNCPLG-NH2); its C-terminus has been converted to a primary amide and a disulfide bridge joins the cysteine moieties. Oxytocin has a molecular mass of 1007 Da, and one international unit (IU) of oxytocin is the equivalent of about 2 μg of pure peptide.

While the structure of oxytocin is highly conserved in placental mammals, a novel structure of oxytocin was recently reported in marmosets, tamarins, and other new world primates. Genomic sequencing of the gene for oxytocin revealed a single in-frame mutation (thymine for cytosine) which results in a single amino acid substitution at the 8-position (proline for leucine). Since this original Lee et al. paper, two other laboratories have confirmed Pro8-OT and documented additional oxytocin structural variants in this primate taxon. Vargas-Pinilla et al.sequenced the coding regions of the OXT gene in other genera in new world primates and identified the following variants in addition to Leu8- and Pro8-OT: Ala8-OT, Thr8-OT, and Val3/Pro8-OT. Ren et al. identified a variant further, Phe2-OT in howler monkeys.

The biologically active form of oxytocin, commonly measured by RIA and/or HPLC techniques, is also known as the octapeptide “oxytocin disulfide” (oxidized form), but oxytocin also exists as a reduced straight-chain (non-cyclic) dithiol nonapeptide called oxytoceine. It has been theorized that oxytoceine may act as a free radical scavenger, as donating an electron to a free radical allows oxytoceine to be re-oxidized to oxytocin via the dehydroascorbate/ ascorbate redox couple.

The structure of oxytocin is very similar to that of vasopressin. Both are nonapeptides with a single disulfide bridge, differing only by two substitutions in the amino acid sequence (differences from oxytocin bolded for clarity): Cys – Tyr – Phe – Gln – Asn – Cys – Pro – Arg – Gly – NH2. A table showing the sequences of members of the vasopressin/oxytocin superfamily and the species expressing them is present in the vasopressin article. Oxytocin and vasopressin were isolated and their total synthesis reported in 1954, work for which Vincent du Vigneaud was awarded the 1955 Nobel Prize in Chemistry with the citation: “for his work on biochemically important sulfur compounds, especially for the first synthesis of a polypeptide hormone.”

Oxytocin and vasopressin are the only known hormones released by the human posterior pituitary gland to act at a distance. However, oxytocin neurons make other peptides, including corticotropin-releasing hormoneand dynorphin, for example, that act locally. The magnocellular neurosecretory cells that make oxytocin are adjacent to magnocellular neurosecretory cells that make vasopressin. These are large neuroendocrine neurons which are excitable and can generate action potentials.