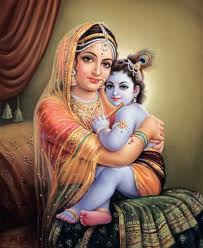 Just like Devaki, aglow with Sri Krishna’s presence within her, those who carry the light of the supreme truth within themselves definitely glow with bliss, they also illuminate others around them.

As the Sri Krishna enters the world as a bright bubbly baby, he enchants all with his charm and gets fans from all around just as he is born! Interestingly, the child form of Sri Krishna is called “Laddoo Gopala”

Lord Krishna’s form as an attractive baby lured one and all to him! As a little child, he was always eating butter, so naturally, he was a chubby little baby, almost as round as a laddoo, a traditional Indian sweet! This particular form of Sri Krishna is therefore called Laddoo Gopala!

Children are the manifestation of God, pure and innocent. This is a dictum that popularly does the rounds in every part of India be it remote rural locales or in the bustle of the metropolises. The God that is referred to almost by direct association is Shri Krishna in his baby form, known popularly as Bal Krishna.

A lot of debate has happened so far in the medical field, and particularly in departments of neurosciences and psychology about the mind of a baby.

Beginning with Sigmund Freud and Lacan during the opening of the 20th century who opined that a baby’s mind is a tablua rasa or an empty, impressionable slate which slowly learns to make sense of the world though the five sense perceptions, followed by the information received through language. In India and other parts of the oriental world, this kind of an analysis of a child’s mind is resisted, primarily due to the existence of the ideas and beliefs about human life, soul etc, informed by religious and communal knowledge.

Our Dharma looks towards Lord Vishnu for answers and cites Bal Krishna’s example as being typical of all children- Inquisitive, restless, extremely delicate and adorably messy. One particular episode that marked Krishna out from all other babies came to pass when one day, during a casual game, BalKrishna had cast a lump of clay into his mouth. His foster mother Yashoda rushed to her child and prompted him to open his mouth and spit out the dirt. Bal Krishna simply opened his mouth. Yashoda was awe struck by what she saw in the child’s mouth and fainted. The whole universe, with countless star systems and galaxies swirled in the mouth of Bal Krishna. This was no stray incident of Bal Krishna showing signs of being extraordinary. Almost from the time of his birth, supernatural events have accompanied the boy. Droves of demons sent by his malevolent uncle Kansa met their doom at the smile of Bal Krishna. The fiercest of snakes and Yakshas have been subdued by a mere boy who was always so much more.

As always, one can screen out the religious and hyperbolic elements and objectively look at the narratives of Bal Krishna. Clearly the child was gifted. He had the most ingenious ways to reach the butter his mother would make and store in their house. When caught all he had to offer was a disarming toothy grin with some baby babble to boost his appeal. The degree of recociousness this child had made it easier for others round him to realize he was meant to achieve greater things in life. While his elder brother Balabhadra would be easily angered, Krishna always had a means of getting past difficulties by the sheer use of wit. He may have been brought up by cow-herders but his heart and mind were always extraordinary. This is an aspect that to date raises the nature-nurture debate that tries to figure out if a person’s character is determined more by  in built natural predisposition one has or by the kind of care and nurture one is given under specific kinds of value systems.

In simpler words, every child represents endless possibilities. Every parent would be aware of the simple joys of getting to see their children grow up. The universe really is a child’s playground- standing for an inimical connection we share with the very forces that make life possible on earth- a connection the hustle and banality of daily life slowly but steadily erases from our psyche. One does not here argue about whether or not children share a magical connection to endless possibility, but given the right impetus and situational support there really is no limit to what a child can grow up to achieve. The historical Yadava Prince after whom Krishna is modelled must have been one such remarkable individual.

Krishna Janmashtami – Message from CEO Krishna Janmashtami – Message from CEO Just like Devaki, aglow with Sri Krishna’s presence within her, those who carry the light of the supreme truth within themselves definitely glow with bliss, they also illuminate others around them. As the Sri Krishna enters the world as a bright bubbly baby, he enchants all with his charm […]
0 1 5 0